WASHBURN COUNTY -- Two men facing felony charges in Washburn County Circuit Court after a Spooner Police Department drug bust in December 2016 have entered pleas with the Court. A third man has yet to plea to any of his charges from the incident, according to online circuit court records.

On May 31, 2017, DrydenWire.com reported that charges had been filed against Matthew Mustafa, of Spooner, WI; Nicholas Graham, of Trego, WI; and William Graham, also of Trego, WI, following an investigation by the Spooner Police Department with assistance from the Washburn County Sheriff’s Office.

According to a criminal complaint, the Spooner Police Department had received tips dating back to June 2016 which indicated that the three men were involved in the distribution of controlled substances in Washburn County. During a traffic stop in the city of Spooner on December 5, 2016, police officers detected the smell of marijuana coming from the vehicle which was being driven by Matthew Mustafa. William Graham was a passenger in the vehicle.

A K9 search of the vehicle resulted in officers finding marijuana and nearly $2,000 in cash. Matthew and William were placed under arrest. Search warrants were obtained and the results of those search warrants led to criminal charges being filed against all three men. 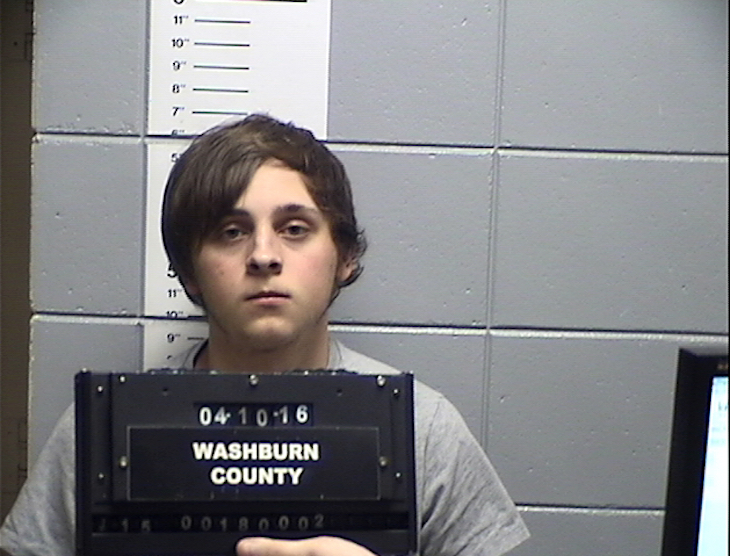 No plea has been entered by William Graham at the time of this post. William is charged with 3 counts of Class H Felony Battery or Threat to a Law Enforcement Officer, Class I Felony Manufacture/Deliver THC (Marijuana), Misdemeanor Resisting or Obstructing, Misdemeanor Disorderly Conduct, and Misdemeanor Possession of THC (Marijuana).

WASHBURN COUNTY -- An investigation by the Spooner Police Department, with assistance from Washburn County Sheriff's Office, involving multiple search warrants regarding phone records, a vehicle, and a residence has resulted in several felony charges being filed in Washburn County Circuit Court against Matthew Mustafa (19), of Spooner, WI; William Graham (23), of Trego, WI; and Nicholas Graham (19), also of Trego, WI.

The criminal complaints state that Spooner Police Department had received tips dating back to June of 2016 which indicated that William, Matthew, and Nicholas were all involved in the distribution of controlled substances in Washburn County and in the City of Spooner. The criminal complaints also state that Matthew reported a burglary at his residence in November and that when officers responded they could smell the odor of marijuana. Officers also observed a security system at the residence which enabled those inside to see anyone approaching the residence as well as a safe. Matthew reportedly indicated to officers that marijuana had also been stolen from his residence during the burglary.

At the time of the traffic stop on December 5, 2016, Spooner Police Department's K9 Officer was brought in to conduct a search of the vehicle. When the K9 was given the command to search, he immediately jumped into the open trunk of the vehicle, actively searching with his nose. The K9 scanned past the rear passenger door of the vehicle and alerted at the front passenger door by standing motionless. The K9 repeated this alert on the driver's side of the vehicle. The criminal complaints state that officers located green material in the vehicle which field tested positive for marijuana as well as an empty silver plastic zip lock bag which had the odor of raw marijuana.

The officers also observed 2 cell phones in the vehicle which were continuously alerting with received messages and phone calls. Additionally during a search of Matthew while he was being arrested, officers found 2 wallets on his person; one belonging to Matthew and one belonging to William. Matthew stated to officers that he was holding William's wallet because William didn't want to lose it. Between the two wallets, officers found a total of $1,748 in U.S. Currency. When officers asked Matthew about the substance found in the vehicle, he denied the presence of marijuana in the vehicle and stated that the odor came from someone who had been smoking marijuana in the vehicle earlier.

Both William and Matthew were placed under arrest for Possession of Marijuana. During the December 5, 2016, traffic stop, William reportedly became verbally combative with officers, yelling profanities and creating a disturbance.

The criminal complaints continue, stating that Spooner Police Department obtained search warrants for Matthew's vehicle, residence and cell phone and also for William's cell phone. During the execution of the search warrants, Matthew, William, and Nicholas all arrived on scene. The criminal complaints state that as a result of these search warrants officers located many items of drug paraphernalia including a glass bong, two pipes and pipe cleaners and rolling papers as well as large amounts of currency.

Nicholas spoke with the officers during the execution of these search warrants, and after Miranda rights were read to Nicholas, the criminal complaint states that he gave the officers permission to search his cell phone and provided a passcode for it.

The criminal complaint filed against Nicholas states that ultimately officers were able to review messages in Nicholas' phone dating back at least to June, July, and August of 2016. The criminal complaint includes a sampling of these messages and the content of those implicates Nicholas in the distribution of illegal narcotics with conversations regarding quantities and prices for marijuana, as well as discussing locations of where not to conduct drug deals.

Several messages reportedly retrieved from Nicholas' phone that are included in the criminal complaint filed against Nicholas reference a “Matt”. One message asks Nicholas “Can you break into Matt's dabs??” In another conversation reference is made to “Matt” picking up “wax”. The criminal complaint states that law enforcement believes these messages refer to Matthew Mustafa. One message from July of 2016 indicates that Nicholas had a connection in Chicago and states: “The plugs from Chicago so it should be able to be a steady flow.” The complaint states later that a Spooner Police Officer confirmed that the term 'plug' is used to describe a drug dealer.

The search warrant obtained for the cell phone belonging to William revealed messages dating back at least to November 2016. The criminal complaint filed against William includes the content of several messages reportedly retrieved from William's cell phone which indicate William's participation in the distribution of marijuana and include conversations arranging times and places to meet other parties who were looking for marijuana.

One message refers to “Nick” having “split it up”. In another message, William states: “I'm weighing it up now,”; followed later with: “Because I got to sell weed.” The last message reportedly from William's phone that is included in the criminal complaint states: “I don't smoke weed man. I only sell it.”

The criminal complaint filed against Matthew states that officers were able to retrieve messages dating back at least to December 2016 from Matthew's cell phone with the access obtained via the search warrant. The criminal complaint contains a sampling of the content retrieved by law enforcement including conversations regarding amounts of marijuana, specific types of marijuana, and prices for marijuana. Officers also reportedly retrieved photographs from Matthew's cell phone of green plant material recognizable as marijuana and 'dabs' (marijuana wax).

In one conversation reportedly retrieved from Matthew's cell phone and included in the criminal complaint filed against Matthew, another party asks Matthew “How much for a zip” and then “or a QP?”. Matthew responds with “700 a zip or 2200 for a qp I think”. In another conversation, Matthew states: “I grabbed some new stuff last night” and refers to it as “purple hindu kush.” The criminal complaint states that a Spooner Police Officer confirmed that “zip” and “QP” are terms for quantities of marijuana.

Charges were also filed on April 11, 2017 by the Washburn County District Attorney's Office against William Graham for 3 counts of Class H Felony Threat to Law Enforcement Officer (listing the 3 individual officers that William threatened during the incident on December 5, 2016); Class I Felony Conspiracy to Manufacture or Deliver THC (marijuana); Class A Misdemeanor Obstructing an Officer; Class B Misdemeanor Disorderly Conduct; and Misdemeanor Possession of THC (marijuana).

On May 2, 2017, one count of Class I Felony Conspiracy to Manufacture or Deliver THC (marijuana) was filed against Nicholas Graham by the Washburn County District Attorney's Office.