MADISON, WI -- The State of Wisconsin is mailing postcards this week to approximately 186,900 registered voters who have not voted in the past four years.

“The postcards are titled Official Voter Registration Notice,” said Meagan Wolfe, Wisconsin’s chief election official. “State law requires the Wisconsin Elections Commission to mail notices to registered voters who have not voted in four years. These voters have 30 days to respond and tell their clerk whether they want to stay on the active voter list  If we do not hear from them or if their mailing is undeliverable, they will be placed on the inactive list and need to reregister.”

“This mailing, which happens every two years following a November election, is just one of many ways we ensure the integrity of voting in Wisconsin,” said Wolfe, administrator of the commission. 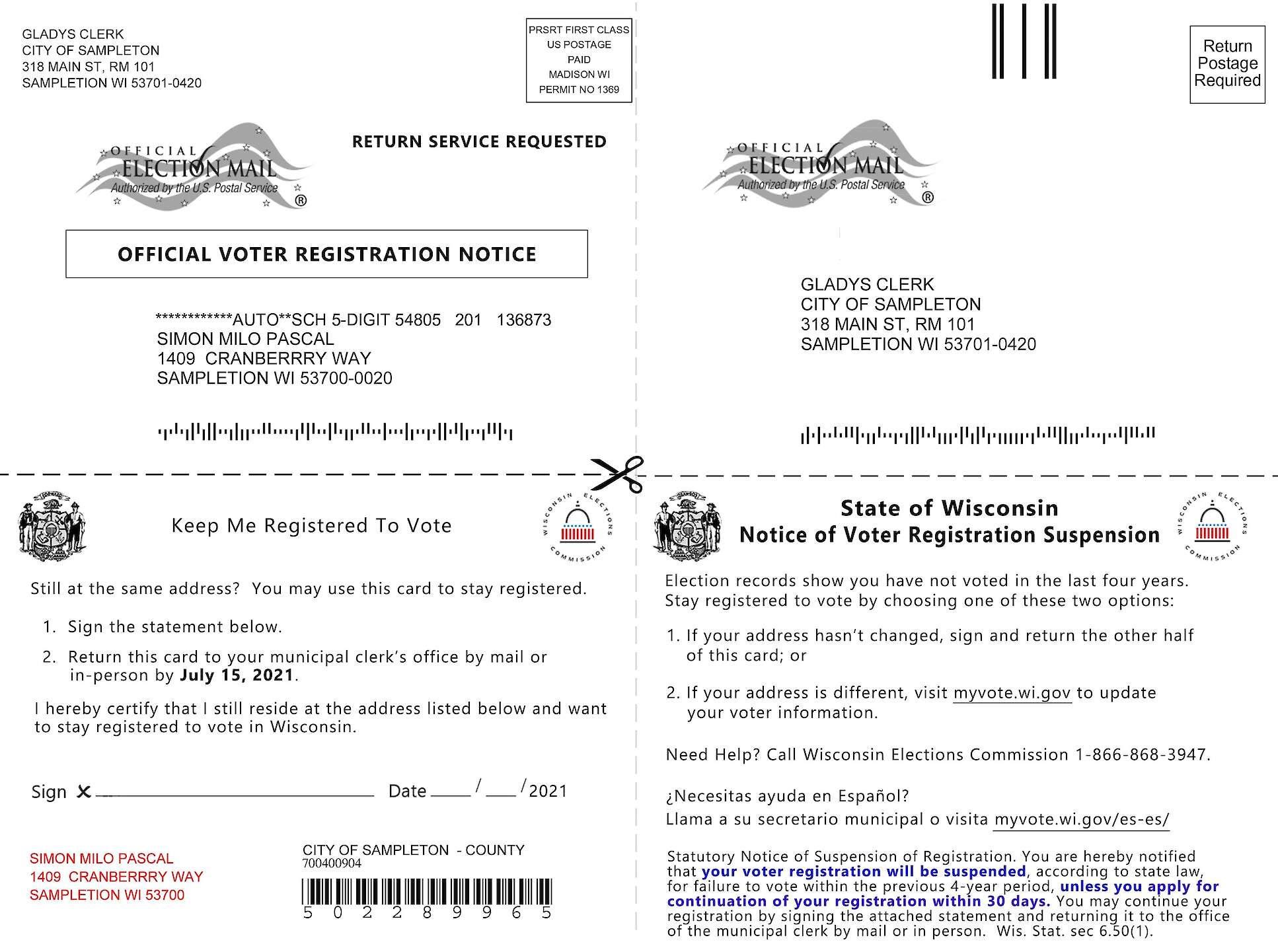 The Wisconsin Elections Commission is sending the postcards to voters who have not voted since the November 2016 general election. Between that election and the 2020 general election, there have been 12 statewide elections and primaries. The postcard asks recipients whether they want to remain a registered voter at that address.

To stay registered, voters who still live at the address on the postcard must sign the part of the postcard that says, “Keep Me Registered to Vote” and return it to their municipal clerk by mail or in-person by July 15. Voters who do not respond will have their status changed to inactive on July 31. The registration of a voter will also be inactivated if the Post Office is unable to deliver their postcard.

If you receive a postcard and your name or address has changed, please do not return the postcard. Instead, please re-register under your new name. Voters can register online up to 20 days before an election at the MyVote Wisconsin website (www.myvote.wi.gov) if they have a current Wisconsin driver license or state ID card. The address printed on your DL or ID does not need to be current, but your current address must be on file with the DMV. Voters may also register by mail up to 20 days before an election, after which they may register at the clerk’s office until the Friday before the election, or at the polling place on Election Day.

If you receive an Official Voter Registration Notice postcard but believe you voted in Wisconsin in the past four years, please contact your local municipal clerk, who is responsible for recording who voted in an election. Your clerk’s name and contact information are on the postcard.

“This mailing helps municipal clerks to identify individuals who have not voted,” said Wolfe. “It is not designed to remove active voters from the list of registered voters. Often the individuals have moved and have not voted since they moved or updated their registration.”

Wolfe noted that this mailing is different than mailings from independent voter registration groups. “Our postcard will have an ‘Official Election Mail’ logo near the postage mark,” Wolfe said. “If independent mailings raise questions about whether you are registered or need to reregister, you can contact your municipal clerk’s office or check your registration status at our MyVote Wisconsin website.”

In addition to sending out postcards every two years, the WEC is continually helping Wisconsin’s 1,850 municipal clerks keep the voter list current. “Working together with Wisconsin’s clerks, the Commission is making the voter list more accurate,” Wolfe said. “This has many benefits to Wisconsin voters and taxpayers, both in the election process and in the costs of conducting elections.”