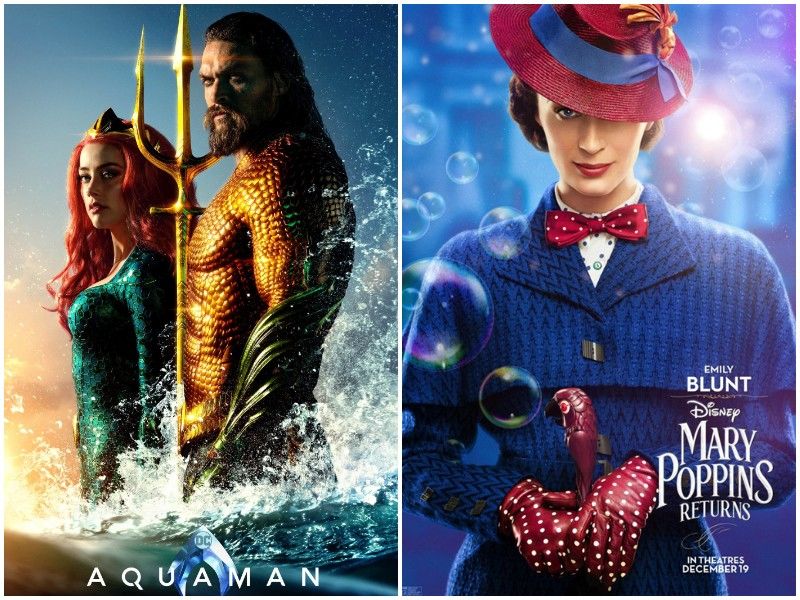 Arthur “Aquaman” Curry (Jason Momoa) is one of the few superheroes who is seemingly more formidable as his alter ego than in his superhero form. Everything about the guy screams “tough,” from his muscular physique to his tapestry of tattoos to his battle-scarred face. His Justice League colleagues Bruce Wayne, Clark Kent, and Diana Prince are nowhere near as intimidating. An early scene in “Aquaman” sees a gang of biker types approach Arthur, apparently looking for a fight. In a normal superhero movie, this would be the scene where the mild-mannered hero demonstrates that their appearance is deceiving as they dispatch their underestimating adversaries with an early glimpse of their powers. But these goons can tell just by looking at Arthur that they’re outmatched, and the scene proceeds peacefully.

I bring up Arthur’s appearance because it’s the one interesting thing about him. Everything else is completely by-the-numbers. His origin is that he’s the son of underwater queen Atlanna (Nicole Kidman) and surface-based lighthouse keeper Tom (Temuera Morrison). Atlanna was allegedly executed by her people for having Arthur, and now as an adult he’s wracked with guilt, which he tempers with superhero work. As a half-Atlantean, he has water-based powers like the ability to breathe underwater and communicate with sea life. He already put these powers to use in “Justice League,” and early scenes of him as an adult in this movie see him take his anger out on a fleet of pirates led by Black Manta (Yahya Abdul-Mateen II). He uses his powers to get onto a submarine that’s being hijacked. But once he’s onboard, he mostly just relies on regular fighting. He causes Manta to suffer a personal loss, and a lifetime grudge is born.

But Arthur has bigger Atlanteans to fry. He’s informed by his princess love interest Mera (Amber Heard) that his power-hungry half-brother Orm (Patrick Wilson) is about to launch an attack on the surface world in his quest to rid the planet of the people who have poisoned its oceans (even the good guys can’t deny that he has a point). To defeat Orm, Arthur will have to either gain control of the Trident of Atlan and defeat his brother’s army in battle, or challenge and defeat his brother in one-on-one combat. The one-on-one combat sounds easier, but the problem is that Arthur doesn’t know how to fight underwater, no matter how much help he’s secretly received from his brother’s vizier Vulko (Willem Dafoe). So it looks like it’s going to be a quest to retrieve the trident and then lead an army of sea creatures in an epic battle. I must stress that putting Arthur underwater is the only conceivable way this movie can convincingly have Jason Momoa at a disadvantage against Patrick Wilson. Even when Wilson was a Watchman, he was the wimpy one.

In a movie landscape highly populated (some would say overpopulated) by superhero movies, “Aquaman” is definitely… one of them. Momoa makes for a unique presence, but all the other actors are just playing archetypes. Atlantis and the undersea world are nice enough to look at, but the action scenes are weak and forgettable. The film is part of the DC Cinematic Universe, and that needs to be taken into consideration. If this were an MCU movie, its blandness would make it notably disappointing, but relative to other DCU entries, it actually comes off okay. It’s not as good as the groundbreaking “Wonder Woman,” but it’s not as irritating as all those dark-but-not-edgy critical flops that we’re used to getting from this franchise. There’s a much better superhero movie out right now with “Spider-Man: Into the Spider-verse,” but if you’ve seen that and you still need a superhero fix, I suppose this one couldn’t hurt.

“Aquaman” is rated PG-13 for sequences of sci-fi action and violence, and for language. Its running time is 143 minutes.

It has been 54 years since Julie Andrews first graced movie screens as nanny extraordinaire Mary Poppins. The stern-but-kind governess used a combination of magic and mental trickery to help the Banks family restore order to their chaotic lives. Now children Michael (Ben Whishaw) and Jane (Emily Mortimer) have grown up, and Michael has children of his own: Annabel (Pixie Davies), John (Nathanael Saleh), and Georgie (Joel Dawson). The family has once again hit a rough patch, with Michael’s wife having passed, his house in danger of foreclosure, and his well-intentioned children always getting into trouble. From out of the sky comes Mary Poppins (now played by Emily Blunt) to save the day again.

Poppins sees the family through a series of adventures, mostly involving them trying to save their home. Michael took out a predatory loan from his own employer Mr. Wilkins (Colin Firth), who would rather take the house than get his money back. The adults want to pay back the loan with some long-lost stock shares, but the children want to raise money by selling a “priceless” bowl of their late mother’s. Some in-fighting leads to the bowl getting broken, which leads to both the best and worst sequences of the film, the former when the characters enter the cartoon world depicted on their bowl, and the latter when they seek repairs from Poppins’ confused cousin (Meryl Streep), a stereotype of an unspecified ethnicity.

The family is accompanied on most of their adventures by Jack (Lin-Manuel Miranda), a lamplighter with eyes for Jane who essentially fills the role of Dick Van Dyke’s Bert from the first movie. It’s mentioned that Bert is still alive, but surprisingly Van Dyke pops up for a cameo elsewhere. I was thrilled to hear that “Hamilton” mastermind Miranda was jumping to the big screen for this movie, but his contribution is a bit of a let-down. He’s often either struggling with his cockney accent (not that Van Dyke exactly nailed it in the original either) or getting swallowed alive by the overproduction of his center-stage number “Trip a Little Light Fantastic.” Only momentarily, as he tells a convoluted story during a portion of the Blunt duet “A Cover is Not the Book,” is he the Lin-Manuel Miranda we know and love.

The movie comes in just under the mark on a number of occasions. Maybe it’s the direction of Rob Marshall, whose stagey musicals I’ve never much cared for, including the Oscar-winning “Chicago” (I’m only referring to live-action sequences here, not the superior animated ones, even one that does in fact involve a stage) Maybe it’s the weird inconsistency of the “saving the house” plot, with Firth’s villain giving the family every opportunity to best him despite it going against his better interests. But I think the film is mostly mediocre because of the inevitable comparisons to the original. When you’re going up against an all-time classic, flawed-yet-agreeable just doesn’t cut it.

Still, I recommend seeing this film. What, you think I’m going to tell you to stay away from something as sweet as a “Mary Poppins” movie? The cast and crew are clearly putting their best foot forward, sensitive song “The Place Where Lost Things Go” is likely to get an Oscar nomination, and characters float under the sea in bubbles and up in the sky in balloons. Take the family to see “Mary Poppins Returns” and you’ll have a perfectly fine time. You won’t be getting a Disney classic, but you’ll get a movie that everybody can at least enjoy.

“Mary Poppins Returns” is rated PG for some mild thematic elements and brief action. Its running time is 130 minutes.