"This is a fun movie that should satisfy both action and comedy fans." 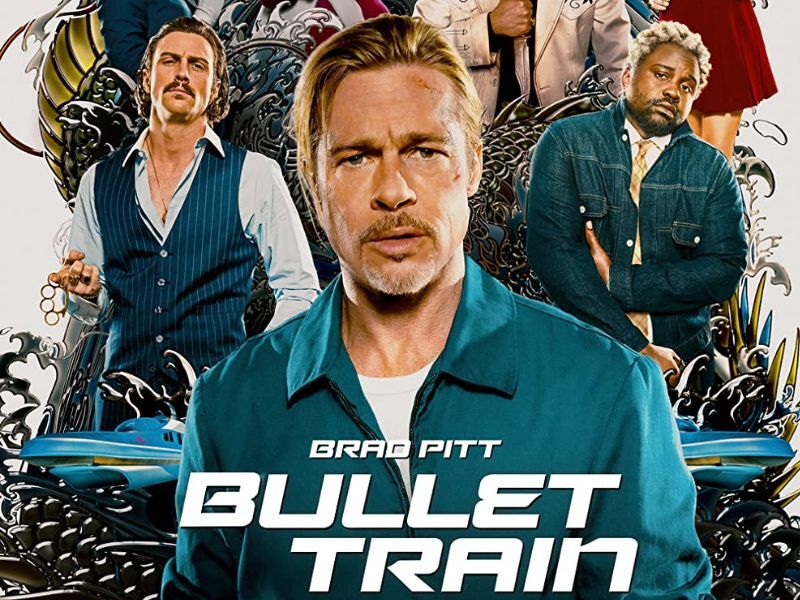 I love movies like “Bullet Train.” Get a bunch of thieves, assassins, and criminal types in compact space and watch them careen and bounce off each other like bumper cars for two hours. It helps that I also like trains. Taking a train out of Penn Station in New York City is my favorite way to travel. And the Shinkansen “bullet” train in Japan, with a maximum operating speed of 320 km/hr., is definitely on my bucket list. If I can ever work the bullet train, a pro wrestling show at Budokan Hall, and a teriyaki burger from a Japanese McDonald’s into a single day… that’ll be a good day. I didn’t have quite that good a day putting in eight hours at work and then going to see “Bullet Train,” but it was fine.

Brad Pitt stars as Ladybug, a former assassin now trying to make it as a non-violent criminal. He’s tasked with stealing a briefcase from a luggage compartment, but of course it can’t be that simple. Ladybug has both the best and worst luck of any person on the planet. For example, he easily finds the unattended briefcase among a massive stack of luggage. But at the very next stop, he’s accosted by The Wolf (Bad Bunny), a former high-ranking cartel member who blames Ladybug for the death of his wife. Ladybug faces difficulties at every subsequent stop, never able to complete the task of simply exiting the train.

The briefcase initially belongs to bickering British twins Lemon (Bryan Tyree Henry) and Tangerine (Aaron Taylor-Johnson). Lemon is obsessed with Thomas the Tank Engine, much to the frustration of Tangerine, who thinks it’s bad for their image that his brother cares so deeply about a kids’ show. The two are tasked with delivering both the briefcase and The Son (Logan Lerman) to Russian mob boss White Death. They lose the briefcase before the first stop, and The Son not long after. They’re going to have to con their way out of trouble, which Lemon thinks he can do by identifying the Diesel, or most evil person on the train.

Also in the mix are The Prince (Joey King) and The Father (Andrew Koji), who is no relation to The Prince or The Son, though he is the son of former Yakuza The Elder (Hiroyuki Sanada). Although she looks young and innocent, The Prince is secretly conniving and dangerous. She has an assassin standing over The Father’s bedridden son (again, not to be confused with The Son), and will effectively give the order to kill if she doesn’t check in with her man every ten minutes. To save his son, The Father will have to help rig the briefcase with explosives and booby-trap a gun so that it backfires on White Death when he inevitably fires it. But to rig the briefcase, he and The Prince first have to steal it from Ladybug, who stole it from Lemon and Tangerine, who want it back. Oh, and there’s an incredibly poisonous snake loose on the train. Repeat: there’s a Snake on the Train.

The fight scenes, snappy dialogue, and laughs are plentiful in “Bullet Train,” which aspires to be like something out of Guy Ritchie or Quentin Tarantino. It’s on track (pun intended) to be on the level of those films until the third act, where it runs out of steam (pun less intended) with a series of long exposition dumps that will make you wish the film would hurry up and get to the end of the line (pun definitely intended) already. Still this is a fun movie that should satisfy both action and comedy fans. I guess what I’m saying is a mildly enthusiastic “All Aboard!”

“Bullet Train” is rated R for strong and bloody violence, pervasive language, and brief sexuality. Its running time is 126 minutes.