Movie Review: 'How To Train Your Dragon: The Hidden World'

“How to Train Your Dragon: The Hidden World” is a fine family film. 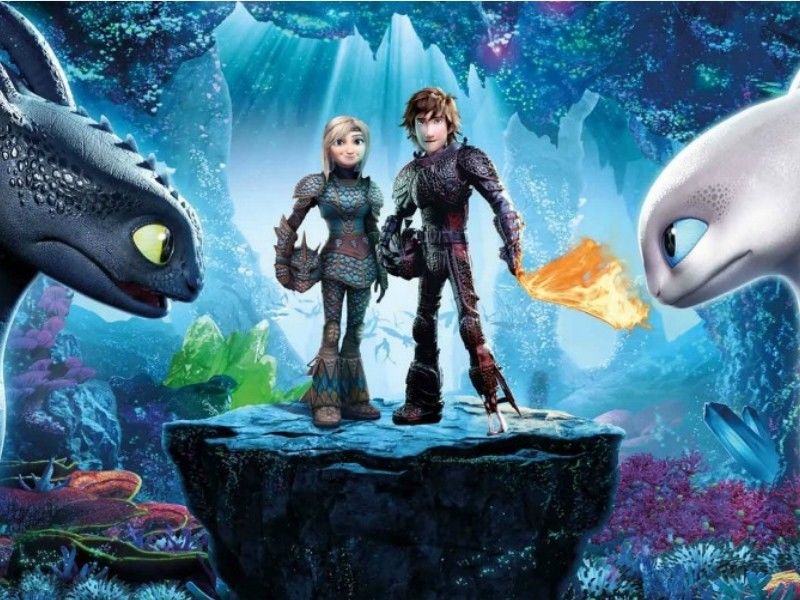 It’s a shame that I never got to review the first two “How to Train Your Dragon” movies from 2010 and 2014, respectively. The beautiful animation, engaging characters, and complex relationships made for some enjoyable family entertainment that I would have highly recommended. But the first film opened on a weekend where I thought “Hot Tub Time Machine” was more review-worthy (no, I don’t know what I was thinking) and the second got beaten at the box office in its opening weekend by “22 Jump Street” (that one was more worthy, though it is worth mentioning that HTTYD2 is in the all-time top ten for non-#1 opening weekends). But the third film isn’t having any problems with its box office. With an estimated debut of $55 million, it’s the strongest opener of 2019 thus far. And the movie surrounding those numbers isn’t too shabby either.

Jay Baruchel returns as Hiccup, now chief of the kingdom of Berk following the death of his father in the last movie. As always, his ambition is to provide a safe haven for the world’s dragons, hunted and hated until very recently. This means a series of missions to rescue dragons from poachers, where he is aided by his friends Snoutlout (Jonah Hill), Fishlegs, (Christopher Mintz-Plasse), Ruffnut (Kristen Wiig), Tuffnut (Justin Rupple), and girlfriend Astrid (America Ferrera), and receives moral support from his mother (Cate Blanchett) and old friend Gobber (Craig Ferguson). The humans aren’t terribly competent in their rescue efforts, but their fleet of dragons, led by original domesticate Toothless the Night Fury, makes them unbeatable. Their raids make them enemies of assorted warlords, who hire famed dragon hunter Grimmel (F. Murray Abraham) to take out Toothless for them. He’s only too happy to destroy the last remaining Night Fury, even if it means destroying all of Berk in the process.

Grimmel’s plan involves using a female dragon known as a Light Fury as bait. As predicted, Toothless falls in love with his female counterpart, which makes him susceptible to Grimmel’s traps and also means that there’s no stopping until she’s rescued too. And if she is to be rescued, then what? Will she be added to the already-overcrowded roster at Berk? Or will the two leave the humans behind for a new life among their own kind in the newly-discovered Hidden World? The Hidden World, by the way, is a dragons-only habitat, not to be confused with the long-lost mother’s dragon sanctuary from the second movie, the fact that the label could easily apply to both worlds is a minor quibble I have with he franchise.

The film is a delight, just like the previous two. Few sights are as adorable as Toothless trying to woo the Light Fury, especially when he’s practicing a mating dance while staring at his shadow on the wall like it’s a mirror (or possibly a partner). And it is also compelling to see Hiccup on the tail end of his journey from boy to man (the franchise has done an excellent job with continuity there). He still has some learning and maturing to do, and he’s feeling pressure to marry Astrid even though he doesn’t think he’s ready, but it’s all the more rewarding to see just how he grows.

Unfortunately, I have to say that this is the weakest of the “How to Train Your Dragon” films, just by a smidge, mind you. Hiccup’s friends, usually a welcome source of comedic relief in the previous films, are here just dumb and annoying, especially Snoutlout, who’s harboring a crush on Hiccup’s widowed mother. Even more unforgiveable is that the screenplay never really knows what it wants to do with Cate Blanchett, an Oscar-winning talent who must never be allowed to go to waste. Overall though, “How to Train Your Dragon: The Hidden World” is a fine family film that brings one of the more consistently entertaining franchises of this era to a satisfying conclusion.

“How to Train Your Dragon: The Hidden World” is rated PG for adventure action and some mild rude humor. Its running time is 104 minutes.