It's not hard to see where this movie draws its inspiration. Subverting fairy tales, that’s “Shrek.” 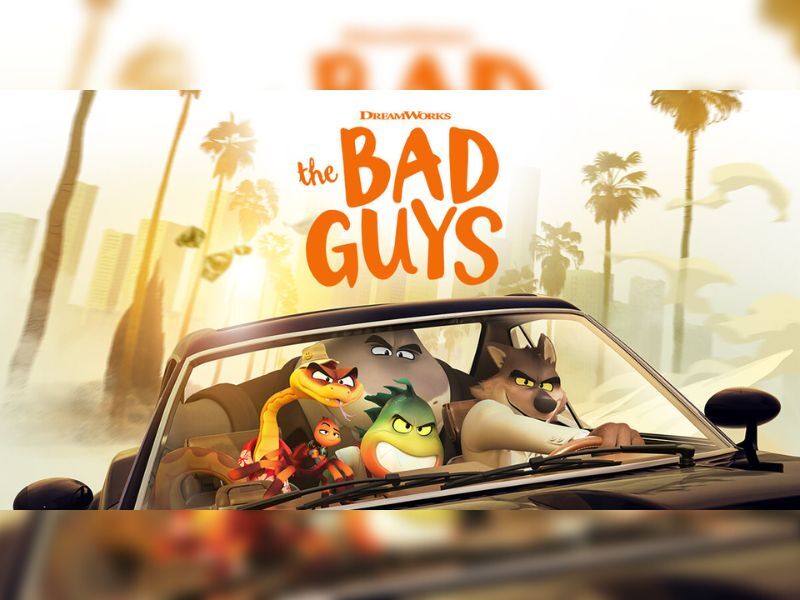 The animated comedy “The Bad Guys” has very quietly been the #1 movie at the domestic box office for the past two weekends. The film follows a group of supposedly unlikeable animals as they do bad, do bad while they pretend to want to do good, then grapple with the decision whether or not to actually do good. Spoiler Alert for this family movie: they do not unanimously decide to remain bad.

The leader is the Big Bad Wolf (Sam Rockwell), his best friend is Mr. Snake (Marc Maron), the rest of the team is Miss Tarantula (Awkwafina), Mr. Piranha (Anthony Ramos), and Mr. Shark (Craig Robinson). At the start of the movie, they lead a life of crime since no one is willing to give them a chance in life, what with the scariness and portrayals as villains and such. Seriously, the world is afraid of “these” animals? These are the most family-friendly versions of these animals imaginable. I’ve been unnerved around some of the fakest snakes you’ll ever see, and I wasn’t for a second scared of the snake in this movie. The Beast from Disney’s “Beauty and the Beast” could be legitimately terrifying at times, so his arc about having to overcome his image made sense. To have the characters be so adorable so early just makes the film so… over-sanitized.

The Bad Guys get busted trying to rob a gala honoring saintly guinea pig Dr. Marmalade (Richard Ayode). Wolf makes a scene of bemoaning how he and his crew deserve a chance to prove they can be good. The fox governor (Zazie Beetz) relents and agrees to let them be potentially reformed by Dr. Marmalade. Wolf insists to his friends that this is all part of a long con to avoid prison and rob the next gala, but secretly he got a taste of being good when he helped out an old lady with a rubbery face just before the robbery, and he found that he liked it. Maybe the goodness should continue. Maybe the others will like goodness if they try it.

Thus begins a journey of twists and turns, where we’re supposed to question who’s conning who and who’s on what side. I’ve seen enough of these movies that even if I couldn’t predict the story beat for beat, I was pretty much right about predicting where everyone would end up. Also, I correctly predicted most of the beats along the way.

It's not hard to see where this movie draws its inspiration. Subverting fairy tales, that’s “Shrek.” Elaborate heists with smooth-talking explanations, that’s the “Ocean’s” movies. The villains reforming brings to mind that 2010 one-two punch of “Despicable Me” and “Megamind.” And you may as well throw in a layer of “Zootopia” while you’re at it. Okay, one thing caught me off-guard: the very first scene in the movie. I hadn’t been expecting an extended tribute to a certain favorite movie of mine. The scene features Wolf and Snake bantering in a coffee shop, and Snake is wearing an awfully familiar-looking Hawaiian shirt. That movie also had a character named Wolf, played there by Harvey Keitel.

Adults will find little to surprise them about “The Bad Guys,” and even kids have probably been taken on this ride a few times before. But the characters are undeniably given a great deal of charm by the voice cast, and a lot of the jokes still land, even if they too are overly familiar at times. This isn’t a movie that you need to take your kids to see right away, but if you want to take your kids to a movie for the sake of taking them to a movie, sure, this is fine.

“The Bad Guys” is rated PG for action and rude humor. It running time is 100 minutes.