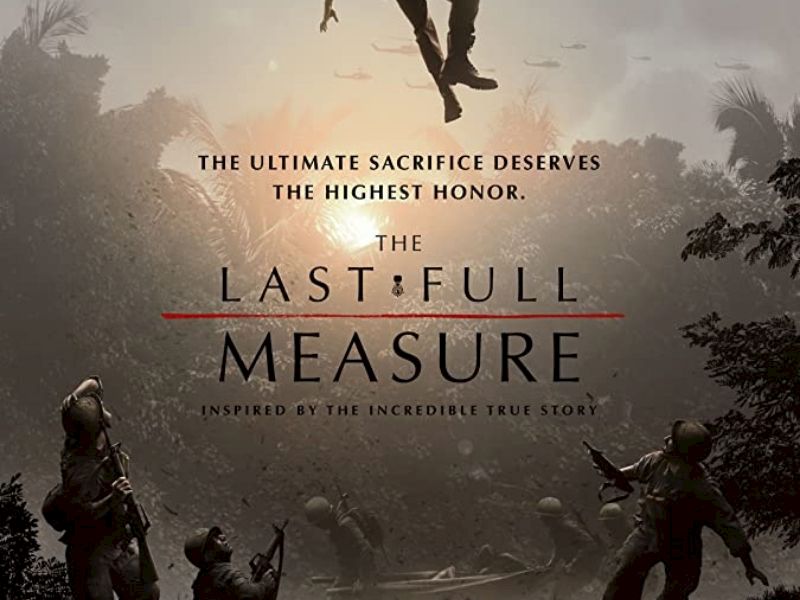 NOTE from Bob Garver: Thanks to readers Bob and Darlene Bassett for suggesting this Video On Demand movie to review. If you would like to suggest an On Demand movie for me to review, please visit www.bobatthemovies.com and leave a comment under the first blog post.

“The Last Full Measure” centers around the decades-long struggle to see U.S. Air Force Pararescueman William H. “Pits” Pitsenbarger (played by Jeremy Irvine in flashbacks) awarded a much-deserved posthumous Medal of Honor for his heroic actions in Vietnam. The film’s production was almost as much of a struggle, having existed in early stages since the 90’s (though perhaps a delay from that was a blessing, as it allowed for a real-life happy ending that could then provide the movie with a satisfying finale) and being bounced around from one studio to another with actors and backers coming and going, and generally getting lost in the system. The film had a less happy ending than its subject, getting dumped into just over 600 theaters this past January and making less than $3 million at the domestic box office. On one hand, it’s almost impossible to say that a film with such noble subject matter didn’t deserve better. On the other, I can see why the film, for all its good intentions, wasn’t a creative or commercial hit.

The film follows the familiar formula of the “investigation” movie. You see it with detectives, you see it with reporters, in this case it’s a lawyer, Scott Huffman (Sebastian Stan). Huffman is handed the thankless assignment by his sleazy buddy Stanton (Bradley Whitford) of assessing a request for a medal upgrade by Pits’ fellow airman Tulley (William Hurt). Huffman doesn’t understand why Tulley can’t just be satisfied with the Air Force Cross that Pits did receive, but Tulley is adamant that only the highest honor is fitting. Huffman, for his part, doesn’t care about the upgrade in the slightest at first. Objectivity is necessary to anyone in his position, but he’s so tactless and actively disinterested that he doesn’t register as anything more than a one-dimensional stock character – that of the cynic who will be won over by the passionate supporting characters by the end of the movie.

Huffman interacts with those who knew Pits, from his still-living parents (Dianne Ladd and Christopher Plummer) to fellow soldiers whose lives he saved (Samuel L. Jackson, Ed Harris, and the late Peter Fonda) to a superior who is now a senator (Dale Dye) and isn’t too keen to have the Vietnam portion of his life brought before the public eye. Almost all the subjects are standoffish toward Huffman, so much so that they only ever talk to him while engaging in another activity – usually involving shooting a gun. The point of these attitudes is to communicate that these war veterans are jaded with a world that betrayed them, but is this really any way to treat the lone person who can get your friend a medal?

Everybody gets a few juicy monologues about Pits making the ultimate sacrifice to save lives, Huffman starts believing in the cause, and the soldiers start believing in Huffman. The movie is extremely predictable, and not just because the film’s advertising (to be fair, corroborated by the real-life story) has made it no secret that Pits gets the Medal in the end. The script falls victim to genre standards, though it is occasionally punched up by the charismatic cast, who no doubt took the roles in this otherwise-unremarkable movie as a way of personally paying tribute to Pits and the many other unsung heroes of the Vietnam War.

Ultimately, “The Last Full Measure” is certainly an earnest endeavor by the cast and filmmakers, but it’s a “heavy” movie that doesn’t bring enough to the table creatively to be an awards contender, so its audience is limited to people looking for a specific brand of inspiration. There’s nothing wrong with that, but if the appeal isn’t immediately apparent, the film probably isn’t going to win you over.

“The Last Full Measure” is rated R for war violence and language. Its running time is 116 minutes.