"I have never seen a Pixar movie I didn’t like, and the “Red”-hot streak continues here." 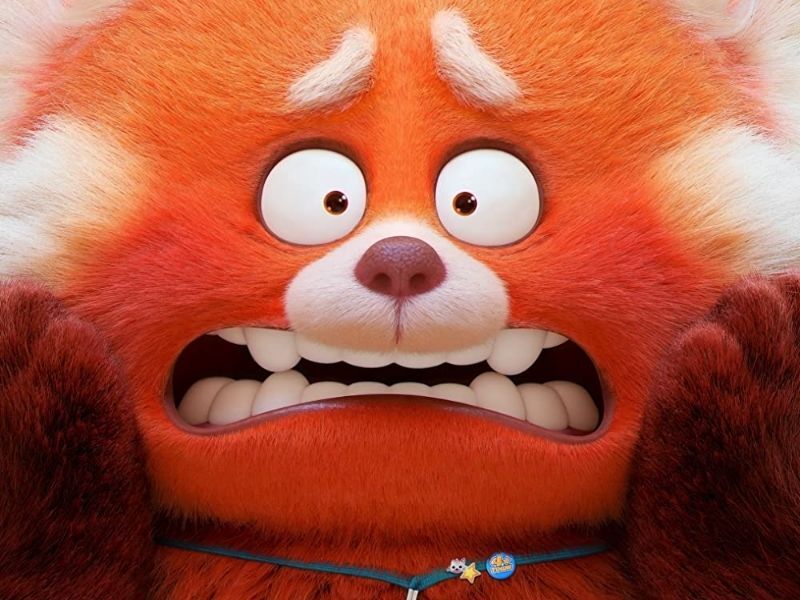 Back in January, when COVID numbers were raging and another lockdown seemed imminent, Disney made the decision to make Pixar’s “Turning Red” a Disney+ exclusive. But soon after holiday tourism died down, so did the COVID numbers, and theaters are fully capable of showing this movie. In fact, restrictions here in New York have eased so much this was the first weekend where I wouldn’t have needed so much as a mask to go see a movie. But I guess the decision to move the film to Disney+ was an irreversible one, or maybe the studio just didn’t want to compete with the second weekend of “The Batman.” I usually reserve this column for theatrical releases, but I’ll make an exception because there were no other major releases this weekend, no carryovers are begging to be covered, and this first-class movie “should” have gone to theaters.

The story follows 13-year-old Chinese-Canadian Mei (Rosalie Chiang) as she undergoes bodily changes tied to strong emotions. Specifically, her human body changes into that of a 10-foot-tall red panda. Based on the film’s advertising, I thought that the panda stuff would be a cutesy workaround for actual biological changes, but surprisingly the symptoms, manifestations, and treatments of biological changes are addressed within the film and very much in play. This movie, though deservedly PG, plays to a more mature audience than the usual Pixar fare.

Mei is horrified to be changing into a wild animal. She had a good thing going with her school and friends and a job as a temple caretaker. Sure, her mother Ming (Sandra Oh) could be a bit overbearing, and it was becoming harder and harder to hide how stupidly boy-crazy she was, but literally transforming into a giant beast was not in her carefully-planned schedule.

My only real problem with the film comes in Mei’s reaction to becoming a panda. She’s freaked out, which is understandable, but her instinct is to try and hide it. Even in a world where magic and transfiguration are possible, it still comes off as unnatural. To her knowledge, she’s the first person in all of human history to undergo a change in species, and she’s still concerned with her social status? At the very least, this calls for an immediate talk with her family. Or a scientist. Or a doctor, either a pediatrician or veterinarian. But no, apparently the movie just wants to give us a sequence of shenanigans and comical misunderstandings. Fortunately this is Pixar, so they’re funny shenanigans and misunderstandings, but the motivation behind them is questionable at best, distracting at worst.

At first Mei can only see the downside in sporadically turning into a panda (in that it’s not normal), but she soon sees an upside: people love pandas. Her friends want to hug her at every opportunity and classmates are willing to pay money to take pictures with her and have her appear at parties. If she really plays her cards right, she and her friends might even be able to parlay her panda powers into going to a concert to see their favorite boy band. Ming forbids it, with or without the dangerous panda element, but what’s a little thing like parental permission when a teenage girl is in love?

At the center of “Turning Red” is the increasingly-unstable relationship between Mei and Ming. Mother-daughter relationships aren’t often explored in Disney movies, especially given the studio’s track record of letting parents see the second act of their stories. The only other one that did it on this level was 2012’s “Brave,” another movie where a character turned into a bear, come to think of it. Sandra Oh absolutely steals the movie as the mother trying to reel in her out-of-control daughter as she’s closer than anyone realizes to losing control herself. I have never seen a Pixar movie I didn’t like, and the “Red”-hot streak continues here.

“Turning Red” is available for streaming exclusively on Disney+. The film is rated PG for thematic material, suggestive content, and language. Its running time is 100 minutes.