*UPDATE 2* The Burnett County Sheriff's Office has issued the following press release regarding this mornings crash. 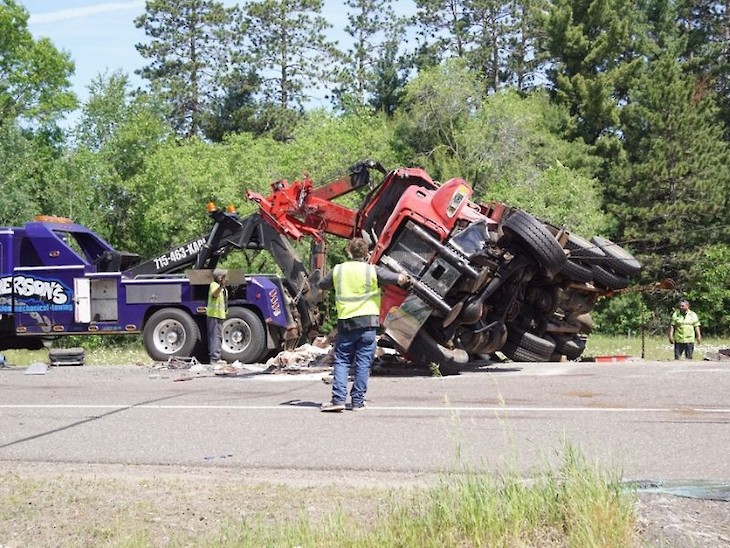 North Ambulance Service, North Memorial Health Air Care Helicopter and Life Link Emergency Air Ambulance responded to the scene.  Both vehicle operators were transported, via helicopter, to hospitals in Minnesota for treatment of their injuries. At the time of this release, no information on the condition of either driver is available.

The crash blocked both lanes of travel from 8:45 a.m. to 2:00 p.m.  Anderson Towing of Grantsburg with assistance from S and R towing of Cameron assisted in removing the wreckage and debris from the highway.

The accident remains under investigation by the Burnett County Sheriff’s Office and the Wisconsin State Patrol.

*UPDATE 1* Spooner Fire Chief Darrent Vik stated to DrydenWire.com via phone conversation a short time ago that the incident was a dump truck vs well-drilling truck.  Chief Vik said that he was unsure if this was a head-on crash or a side-swipe crash. Vik, who was on scene during the incident, stated that two people were helicoptered out.

BURNETT COUNTY -- A multi-vehicle crashed occurred this morning, June 19, 2019, at approximatley 8:38a near the Burnett County and Washburn County line. Two vehicles, believed to be dump trucks, were reported to be involved in the head-on crash and the Wisconsin State Patrol says the incident occurred near the intersection of County H and WIS 70.

Multiple agencies responded to the call.

The WSP says that WIS 70 is currently closed and says that as an alternative route, EB drivers should head north on Greenfield Road to County H, then south back to WIS 70. Reverse for WB.