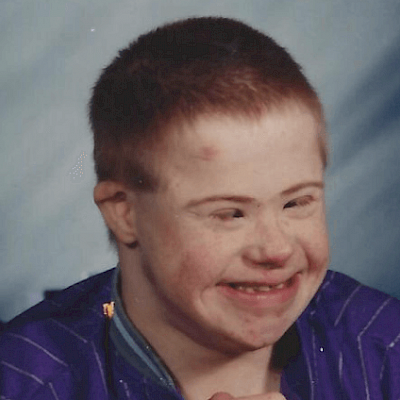 In Memory of Jason Becker

With deepest sorrow, we announce that Jason (J.J.) Becker, age 40, our beloved son, brother, family member, and friend passed away peacefully at his home in Chippewa Falls, WI surrounded by loved ones on Friday, February 22, 2019.

Jason was born on April 27, 1978, in Barron, WI to Melvin and Kitty Becker.  Jason was preceded in death by his father, Melvin Becker; step-brother, Kevin Van Nortwick; grandfather, Walter Becker; and grandparents, Ozzie and Ruth Johnson.

Those who knew J.J., even a little, lost a shining light.  Jason was an amazing individual that was known for his hugs and amazing spirit.  Jason attended early childhood at Cameron School at age 3.  Jason then moved to Ann St. School in Rice Lake at age 6 until age 21.

Jason will be remembered for his infectious giggle when he was little, and his love for music.  You would often catch Jason jiving away to a good song.  Jason had another love and that was going for a ride and stopping for a treat at Dairy Queen.  Even though Jason did not speak a word he always found a way to get his father to stop at DQ.

A special thank you to the Northwest Pathway for Independence for Jason’s great care for the last ten years.

A visitation is planned Friday, March 1 from 10-11 A.M. with a service beginning at 11:00 at Burnham-Ours Funeral Home in Chetek.  An interment is being planned for a later date.

Please join the family for fellowship and a celebration of life immediately following the service at the Chetek Bowling Center until 3 p.m.