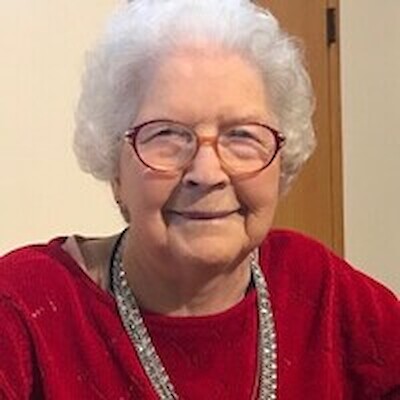 In Memory of Marjorie Anderson

She grew up in Prairie Farm with 10 brothers and sisters and attended Prairie Farm High School. She married Clark Tabor in 1944 while he was on leave from serving in the United States Army during WWII. They raised their four children, Linda, Roni, Russ and Marcia in Barron.

Marj and Clark were charter members of the Barron VFW Post 8338. She served as the first auxiliary president and remained active after Clark’s death in 1973. She was recently recognized by the post for her lifelong contributions.

She married Virgil Anderson in 1978. They enjoyed traveling to visit their blended family all over the United States, playing cards and family gatherings. Marj was a people person, she brought her love, compassion and caring to every gathering. She was an exceptional cook and baker that many enjoyed around her welcoming table. Her love of family, friends, God and community guided her every day.

In her later years she gave her deep spiritual guidance and prayer to many at Monroe Manner in their time of need.

A memorial service will be held at First Lutheran Church in Barron on Thursday, January 26 at 11:00 a.m. with Rev. Ron Matthews officiating.  Visitation will be one hour prior to the service at the church.

A celebration of life and cemetery committal will be held in late spring, 2023 at the Greenwood Cemetery in the Town of Dallas.

The family would like to extend their gratitude to the staff at Monroe Manor in Barron and Mayo Hospice for the kind and loving care they provided Marj.

In lieu of flowers please consider donating to the Barron Area Food Pantry or First Lutheran Church in Barron.