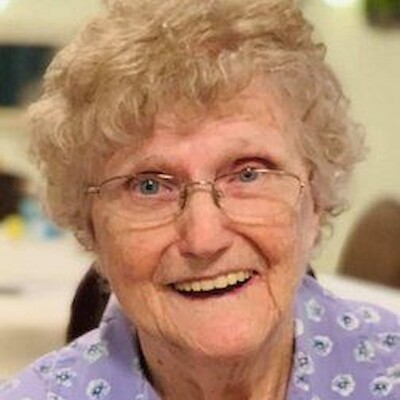 In Memory of Mary Personette

She was born December 6th, 1934 to Arthur & Idabell (McDonald) Troyer at Knox, IN where she was raised and attended school.

On May 24th, 1952, she was married to Earl Personette at Grovertown, IN. The couple moved to Spooner in 1960 and purchased a resort west of Spooner. After selling the resort, Mary went to work for Dorr Electric in Siren & later Papa John’s Restaurant in Hertel. She later moved to Cameron & has been a resident of Our House in Menomonie since this past April.

Mary was preceded in death by her parents, husband: Earl on July 6th, 2015 & her siblings. She is survived by her daughter: Cathy (Gary) Roe of Menomonie, son: Jerry Personette of Alaska, sister: Esther Freet, grandchildren: Charissa Roe-Hanson, Geoff Roe, Jerry Schultz, John, Ken, Joe & Nikki Fus, along with their children & grandchildren. She had a special bond with Caden, Calista & Dahlia, 3 of her many great grandchildren.

In accordance with her wishes, no services are being planned. She will be interred with her husband at Northern WI Veteran’s Memorial Cemetery at Spooner. Arrangements are with Rausch-Lundeen Funeral Homes, Cameron & Dallas.