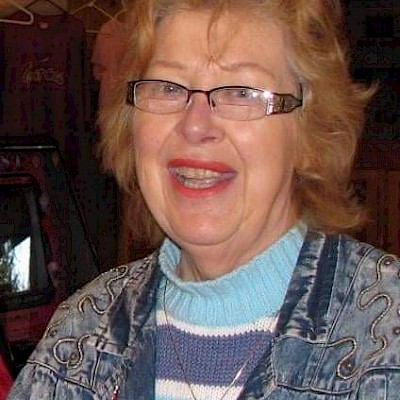 In Memory of Patricia Dettloff

Patricia was born June 6, 1933, the eldest of three children born to Peter C. Wilmsen and Pauline K. Rudman in Chicago.  While growing up Patricia moved often to various sections of the south side of Chicago, attending a variety of different grade schools.  In addition to being a social butterfly and attending many high school socials & dances as a teenager, Patricia enjoyed going to movies with friends or staying home and enjoying the new novelty known as television.

While she was still a teenager, Patricia developed an extraordinary talent as an artist drawing amazing pencil and pen & ink likenesses of the movie stars of the day, cartoon characters, and various other scenes… even considering going to school for art after graduating from Lourdes High School in 1951.  After high school, Patricia worked in a department store in the Brighton Park area of Chicago.

In 1953, Patricia married Ronald Dettloff in Chicago and they had two children, Robert and John and they settled into a new home on the city’s south side where they raised their boys.  During the 1960s, Patricia earned extra money as an Avon saleslady, walking door to door and having no problem using her natural sales abilities to sell product and even won sales awards with the company.

In 1964, the Dettloffs began vacationing at Indian Trail Resort on the Chippewa Flowage and it soon became an annual event.  In 1972, Patricia and her husband bought Indian Trail Resort and operated it together for 12 years, divorcing in 1984.  From 1984 through 2007, Patricia (along with her son John) continued operating the resort until she retired from resorting after a total of 36 years… selling her remaining portions of the business to John and Brenda by 2007.

During Patricia’s years as a resorter, she served as vice president – and later a director - on the board of directors of the Hayward Lakes Resort Association (later known as the HLVCB) from 1972 until 2016.  She was on the committee when the HLVCB received the award for “Outstanding Marketing Initiative” in 2002 for the JEM Grant “Catch the Big One” under the new Hayward Lakes Visitors and Convention Bureau.  For many years Patricia worked hard as the vacation guide committee chair, spending countless hours putting together promo ideas and laying out the vacation guide.

After she turned 50, Pat turned her sights on becoming a world traveler during the resort’s off season for the next 20 years.  Journeying to nearly every corner of the world, Pat came back with countless stories and photographs from such locales as Canada, Alaska, Mexico, South American, Antarctica, Africa, China, Korea, the British Isles, various European countries, and many more places.  She cavorted with penguins, went on safaris, climbed the pyramids, white water rafted, went on submarine rides, and many more adventures… some of which were quite harrowing.

Patricia was the ever present welcome committee at Indian Trail Resort and was the consummate resort hostess for her nearly four decades in the business; she loved teaching young kids new games in the family tavern at the resort; she enjoyed fishing for panfish, walleye, and northern; she adored the spectacular flowage sunsets; and loved her children, grandchildren, and great grandchildren.

She was preceded in death by her parents, Peter & Pauline, and her son Robert Dettloff.

A private service is being held with an internment at the Greenwood Cemetery in Hayward.  The family is asking that any donations be directed towards the Waters Edge Care Center in Hayward, which provided her with the greatest of care and compassion.