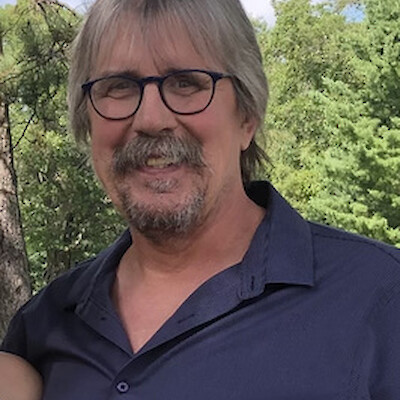 In Memory of Ronald Skold

On Tuesday, November 24, 2020, Ron Skold, beloved husband, father, and grandfather, passed away at home at the age of 62 after a five-year battle with cancer, surrounded by family and much-loved pets.

Ron was born on April 25, 1958 in Siren, WI to Erick and Mae (Tjader) Skold. He met and started a life with Peggy Skold on November 28, 1983 and they married on December 30, 2000. Together they raised two sons, Benjamin and Matthew, and one daughter, Hannah. Ron worked for over 40 years as a heavy equipment operator in utility construction, many of those years in leadership positions.

Ron was a passionate football fan, rooting on the Packers to victory every season. He loved westerns, spending countless mornings watching Bonanza and Gunsmoke before going out to the garage to create beautiful furniture and art out of a passion for woodworking that he discovered after retirement. Ron adored his family’s annual trips to Disney World, more excited than any kid could hope to be. As part of those trips, it was important to Ron that he carried on his mother-in-law’s traditional visits to family in South Carolina. But most of all, he was a devoted husband and father, and gave everything of himself freely to love, protect, and provide for his wife and children. His memory is baked into every aspect of their lives. From putting up the family Christmas tree, to his famous pancake dinners, to his terrible jokes that he insisted were hilarious, the memory of Ron and his fierce love for his family will always remain a cherished gift by those who knew and loved him in return.

Ron was preceded in death by his father, Erick, his mother, Mae, and many aunts, uncles, cousins, and friends. He is survived by his wife Peggy, three children, Benjamin, Matthew, and Hannah, siblings Roger (wife Colleen), Gail (husband Herb Smiley), and Bob (wife Gwen), two grandchildren Anthony and Alyssandra, and many cousins, nieces, and nephews. Due to COVID-19 the family will not be holding any memorial services until the spring of 2021. They ask that in lieu of flowers, donations for funeral expenses can be sent to 6409 Pike Bend Rd, Webster, WI.